Estás aquí: Hogar Blog Puerto Banus is not for us - a story of one property

Puerto Banus is not for us - a story of one property

One of our investors called me a few years ago. This time he wasn't looking for a property for himself, but his friends who were just starting their adventure with Spanish properties asked him for recommendation. Recommendations of our clients - also would-be ones - always make me happy, so I thanked the interlocutor. In his last sentence, he said: "they are very demanding clients, it will not be easy". And in fact, it wasn't.

It all started as usual, with a morning coffee meeting at the bar of the hotel where both investors stayed. We agreed what and in which order we will visit, and then they presented me their business idea for Spain. It was simple: they were going to set up a limited company here, since in their country they had several joint ventures and this type of cooperation worked out for them. The new company was to be the owner of all properties, which depending on the type and market situation were to be bought, renovated and resold at a profit or rented - and after a few years resold at a profit.

It won't be easy

I will spare you descriptions of our research that lasted about 6 months. I will only say that the customers narrowed their area of ​​interest: it was basically only the first line in Marbella, preferably around the promenade. They had a good budget, so the task seemed easy. Until the first day of visits, when after seeing all properties selected by us and verified in terms of search criteria and the legal and urban situation of the property, customers said: "none of them". We still had a few suggestions up, but among those from the first round were my two favorites, and none of them aroused the enthusiasm of customers. Then for the first time I thought: "it won't be easy."

Because the ceiling was too low

Customers came several times, before each visit we were looking for new offers. Who visited Marbella before knows that although the promenade is long, the choice of interesting properties is quite limited there, because the first line in Marbella remembers the time of General Franco, so the buildings are simply old and not the most attractive ones. And what we were looking for was supposed not only to enjoy panoramic sea view, but also to be luxurious. Once we were close to booking a certain apartment, but the final rejection was decided due to the low kitchen ceiling, according to customers. In fact, for some reason the apartment had floors on different levels and the ceiling in the kitchen for someone taller than 180 cm could have been too low.

The situation was absurd

Then, once again, I proposed expanding the search area, because in our existing one customers literally knew every apartment that was on the market. We went to see some properties in Puerto Banus. It seems that almost everyone would like to be able to live there (or at least come on holiday). Well, almost. Because our investors did not. We found ourselves in an impasse. Customers went back home announcing another visit, unfortunately with less and less enthusiasm, and I began to seriously wonder what to do with it. The situation was quite absurd: customers were very active, with a lot of money to spend, absolutely loyal, and we had no idea what to do next.

We do not give up easily, so the search continued, but we had nothing to choose from. And then that email came. "I will sell a 3-bedroom penthouse with a sea view, renovation needed." Fantastic. Location? Puerto Banus. I made an appointment with the owner anyway and went to see that apartment. A feria of colors struck me from the door: the walls in the living room were canary, the kitchen was navy blue, the bathrooms were blue, and the bedroom on the top floor had red carpet and pink walls. "Breathe deeply," I said to myself and turned on my imagination. What I saw caused me to grab the phone and call our customers.

One of them decided to take a chance and fly over to see my discovery. Fortunately, the one who came had imagination and saw what I did. In addition, he caught the eye of the owner, an 80-year-old lady, as colorful as her apartment and extremely bright. Since that lady was fluent in several languages, they basically went through the negotiations themselves. I think the customer's personal charm was not without significance, in any case the negotiated sale price was attractive.

Breaking into the bunker, e.g. we are renovating

The transaction was perfectly prepared, so it went smoothly without any surprises. In the meantime, our construction company in cooperation with investors prepared plans for the renovation of the apartment. And it started. We demolished almost everything on both levels. The investor - the one with imagination, of course - wished so see glass stairs, illuminated, leading upstairs. Ultimately, they had to be made to order and built from scratch in the apartment. To build them we had to break through the almost one-meter reinforced ceiling. The buildings in Andalucia del Mar estate were built in the eighties, so they are very solid and the process of cutting the ceiling was similar to breaking into a bunker. In any case, we succeeded.

The general renovation lasted almost 6 months. We replaced everything: installations, pipes, air conditioning, lighting - just everything. We opened the kitchen and threw out excess wardrobes from the living room, which gave us a beautiful, bright, open space that now houses a living room, dining room and a very practical, modern kitchen. The view from the salon is breathtaking: the bay, greenery and marina of Puerto Banus in the distance. On the same level, there is one bedroom with a balcony with a view of Gibraltar, and with its own bathroom with 2 showers and heated floors. The famous "Hollywood" stairs lead to the first floor, where there are 2 bedrooms that share 1 bathroom with a shower and heated floor. In the bathroom, there is a space for a washing machine and a dryer. The bedrooms are very different: one, small with 2 single beds and balcony, and the other one, spacious, with a large bed and two terraces: one of them repeats the view from the living room, and the other, the largest and facing west, is a fantastic place to admire sunsets over the Mediterranean Sea with Gibraltar in the background.

See how this penthouse has undergone a spectacular metamorphosis

The "wooow" effect, i.e. the penthouse, is waiting for the new owner

That summer we had started to rent our newly renovated wonder to tourists. There was not a single guest who would not express a delighted "wooow" when entering the apartment. No wonder that we quickly earned - in fact, the apartment and us - a rating of 9.8 out of 10 on Booking.com. Tourists love our penthouse, we have people who come back every year, not necessarily in the summer. The owners are very satisfied with the turn of events and probably would not decide to sell the apartment, were it not for the fact that it is an investment and as such should bring the planned profit to the company. So now we're working on it. Our favorite "ADM505", because this is how we call our penthouse (Andalucia del Mar, apt. 505), is for sale. 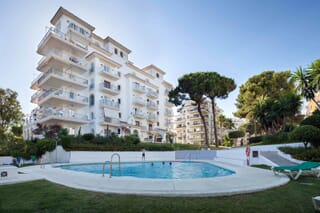 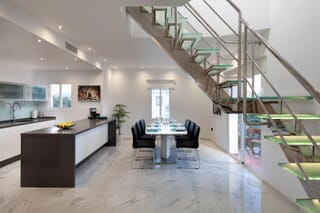 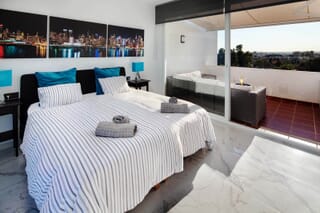 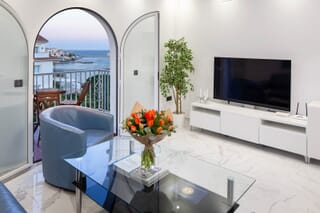