Estás aquí: Hogar Blog How does the coronavirus affect the property market in Spain?

How does the coronavirus affect the property market in Spain?

2020 is beyond any statistics. CoVid set a precedent, we have no historical data to refer to the current world situation. Spain spent almost the entire second quarter in state of emergency, introduced on March 14, and lifted on June 21, 20.

At that time, the borders were closed and most of the economy stopped. What did the closure of borders and the cancellation of flights meant for the Spanish real estate market, which is largely a market for holiday homes bought by foreigners?

Huge impact of coronavirus on real estate in the second quarter

The property market in Spain in the second quarter of this year recorded a decline by nearly -40% (-39.90%). During that time, 76,545 sales transactions were made, compared to 127,357 in the previous quarter. The primary market recorded 14,286 sales, well below the 24,252 registered in the first quarter, down 41.09%. 62,259 sales were recorded on the secondary market, with a quarterly decline of -39.62%. These numbers place the home sales market in the second quarter of 2020 at a level similar to 2013, the weakest in the history of this market - although this time the reasons for these drops were completely different.

All Autonomous Communities saw declines in the number of real estate sales. The highest levels of sales were recorded in:

The Autonomous Communities with the largest quarterly declines were:

Restrictions on movement between countries affected the purchase of Spanish properties by foreigners for most of the second quarter. Their market share was 10.66%, compared with 12% in the first quarter. In absolute terms, it dropped to 8,000 transactions, down from around 15,000 in the first quarter.

Conflicting data for the third quarter

In the last few days, the Spanish press has reported: property sales in August increased by 6.8%,… and fell by 12.6%. 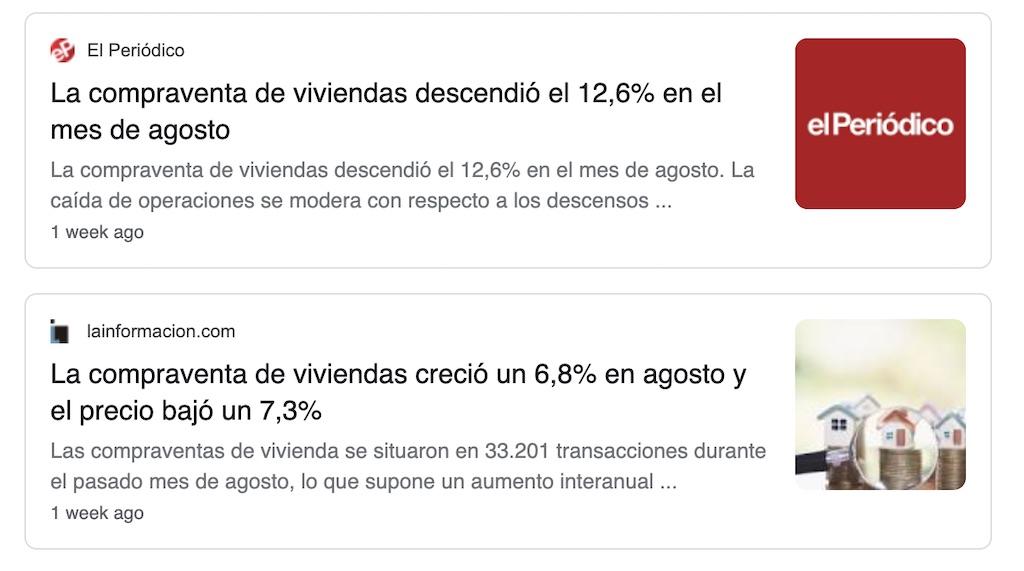 It is good to know that in Spain there are two main sources of official real estate sales data:

Sales figures from notaries are more up-to-date as they tell us how many transactions were actually completed in a given month, but don't give much detail beyond the number of transactions.

The INE sales data provides more detailed information, for example a regional breakdown of sales, but delays the market information by several months as it takes some time to go through the process of entering the act of sale in the Spanish land register. Thus, the sales data from INE tell us almost nothing about the number of sales made in the month to which they relate, but only about how many previously completed sales were entered in the register this month.

During the summer, property sales increased

After the opening of the borders in early July, a lot of movement started on the local real estate market. During the state of emergency, developers offered their clients interested in buying a property the possibility of a virtual visit to the property and its temporary reservation until the client's arrival after the borders opened. In July such reservations began to be formalized. As a result, developers had a very good month for sales.

This process continued in August. According to data from notaries, sales of real estate in Spain increased by 6.8% in August compared to the same month last year to 33,201.

How is it that property sales have increased while Spain is going through the deepest pandemic crisis in Europe with a forecast decline in GDP in 2020 to 12.8%? The answer is pent-up demand, which, due to the state of emergency, could not find an outlet earlier and the proverbial bag with sales dissolved in August.

We do not yet have complete Q3 data on the number of properties sold, but I assume the numbers could be surprisingly positive, of course given the situation in which we operate.

The average property price in Spain remained stable in August, with a slight increase of 0.1% compared to July. Although the average figure has recovered by 1.8% since the start of the sanitary crisis in March, housing continues to grow by 0.9% y / y.

The Mediterranean coast and islands recorded the largest declines since the alert: 4.6% and 4.3% respectively.

If you intend to buy a property in the nearest future, don't expect any significant price reductions, especially in the primary market. In the secondary market, as usual, much will depend on the reasons for the sale. As Iñigo Molina of Colliers International said: "Since there are hundreds of sellers, price adjustments depend mainly on the individual needs of each of them and the urgency of the sale." The faster the seller must sell, the greater the price adjustment. Overall, most analysts expect a decline of between 5% and 10% compared to February 2020 prices.

After a good third quarter, some slowdown in the property market in Spain should be expected. It will mainly result from the exacerbating epidemiological situation throughout Europe and in the world and new restrictions imposed by the governments of individual countries. Hopefully, there will be no border closure and paralysis of economies, but quarantines in various countries and government recommendations discouraging foreign trips will unfortunately affect the mobility of potential buyers. Especially in the for us most interesting sector of holiday properties or second homes, bought in Spain by foreigners.